In 2007, I put together what I now see was the beginning of my understanding of religious education.  I found a way to make the Bible real to the children in my congregation.

The lesson that sticks in my mind as having been particularly fulfilling to plan and teach was the story of creation told in layers, over the course of eight weeks.  Let me first explain that, though we had a set curriculum, each teacher/instructor/mentor puts together his/her lesson plan according to their own gifts of the spirit.

That means that each individual can teach the same lesson in very different ways.  During this particular time period, I was the only person available to teach the class for a two month period of time.  This was a one-room “school house” featuring ages 4 to 16!

And then it occurred to me, that this was a room of amazingly creative kids that would get a kick out of “changing” their world.  So, what followed was 7 weeks spent talking, thinking, praying and transforming our classroom walls into The Garden of Eden.

Each session entailed a commitment from each of us to stick only to that “day’s” creation.

Day 1: Let there be Light

Day 2: Separated the Waters above from the waters below

Day 5: Created the Creatures of the Sea and Birds of the Air

And on the 8th Sunday: 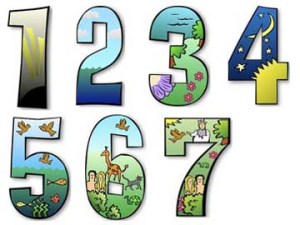 In the beginning God created the heavens and the earth. The earth was formless and empty, and darkness covered the deep waters. And the Spirit of God was hovering over the surface of the waters.

Then God said, “Let there be light,” and there was light. [we turned on dim lamps] And God saw that the light was good. Then he separated the light from the darkness. God called the light “day” and the darkness “night.” And evening passed and morning came, marking the first day.

Then God said, “Let the waters beneath the sky flow together into one place, so dry ground may appear.” And that is what happened. [the guest pulled a blanket from the ceiling revealing strands of silver foil hanging from the ceiling] God called the dry ground “land” and the waters “seas.” And God saw that it was good. [an invited guest rolled brown paper and taped it to the walls of the classroom; while another guest unrolled blue paper with the children’s drawings of sea creatures attached]  Then God said, “Let the land sprout with vegetation—every sort of seed-bearing plant, and trees that grow seed-bearing fruit. These seeds will then produce the kinds of plants and trees from which they came.” And that is what happened. [at this point I started attaching the different trees and plants to the “land”] The land produced vegetation—all sorts of seed-bearing plants, and trees with seed-bearing fruit. Their seeds produced plants and trees of the same kind. And God saw that it was good.   And evening passed and morning came, marking the third day.

Then God said, “Let lights appear in the sky to separate the day from the night. Let them mark off the seasons, days, and years. Let these lights in the sky shine down on the earth.” And that is what happened. God made two great lights—the larger one to govern the day, and the smaller one to govern the night. He also made the stars. God set these lights in the sky to light the earth, to govern the day and night, and to separate the light from the darkness. [by now all the kids wanted to help attach stars to the ceilings and walls] And God saw that it was good.   And evening passed and morning came, marking the fourth day.

Then God said, “Let the waters swarm with fish and other life. Let the skies be filled with birds of every kind.” So God created great sea creatures and every living thing that scurries and swarms in the water, and every sort of bird—each producing offspring of the same kind. [we attached the big sea creatures and the animals that swim and all kinds of birds] And God saw that it was good. Then God blessed them, saying, “Be fruitful and multiply. Let the fish fill the seas, and let the birds multiply on the earth.”   And evening passed and morning came, marking the fifth day.

Then God said, “Let the earth produce every sort of animal, each producing offspring of the same kind—livestock, small animals that scurry along the ground, and wild animals.” And that is what happened.  [we attached all the tame and untamed animals] God made all sorts of wild animals, livestock, and small animals, each able to produce offspring of the same kind. And God saw that it was good.