A few years back, I was sitting at a table with a group of denominational church leaders in the United Church of Christ offices in Cleveland, OH.  This was the annual meeting of the Council for Hispanic Ministries and I had just been voted onto the board as Woman-at-Large.  This was my first time attending and already God was finding a way for me to return…

As I sat in the room and listened to what was and what was not happening in other Regions, I jotted a thought on my notebook: “What are you first? Woman, Christian, or Latina”

There was a mid-day break and I sat with my newly met brothers and sisters, and like all good geeks, I had my notebook at the ready…Martha suddenly said, “Our kingdom is in need.”  The conversation continued, but later on that night I circled her words and added, “be honest with yourself, what are you willing to do about it?”

I started to think about Esther.  That Biblical character that is seldom preached about, but often held up as an exemplary woman in comparison to Vashti (that first wife).

As I sat in my hotel room that night doing homework, under the name Esther I wrote: “Latina Women of Faith, using Esther’s journey into a new culture, and the emulsion of the two within herself…” I have no idea where I was going with it, but before I went to sleep I starter RE-reading the Book of Esther and that night I wrote: “God made us Latina (Hispanic) in a country that is different from ours.  But HE made us for this season.  We need training to fulfill HIS purpose for us!”

The next morning I finished reading the Book of Esther (it’s quite short) and I made a list of things I thought a harem girl would have to learn before having a chance at becoming queen: How to dress, How to talk, Who to talk to, How to be a hostess, and that’s assuming she was “sexy” enough to catch his eye!

A year and a week later (October 15-16, 2010 ), Manantial de Gracia was able to host the 1st CHM New England Region Women’s Conference titled: Using the Book of Esther to begin our Journey into Excellence! 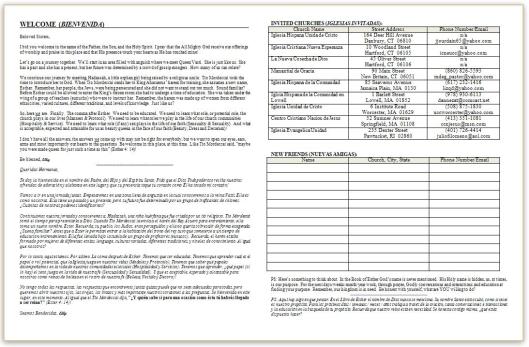