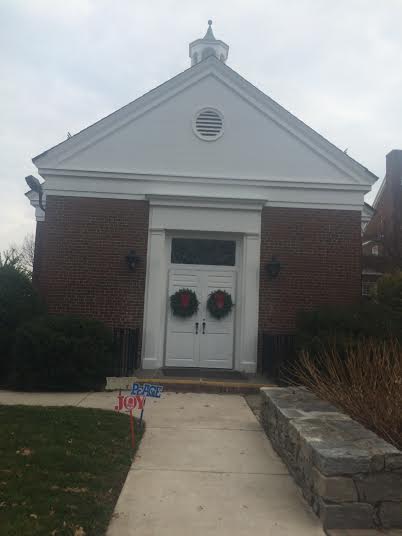 One: This season of preparation is half done, and today we light the third candle of our wreath. Este tiempo de preparacion esta casi terminado, hoy prendemos la tercera vela.

All: In the midst of all the parties and merriment, we are a people seeking true joy in the arms of the One who comes to bring it. En medio de las fiestas y la risa, somos un pueblo en busqueda del real gozo que encontramos solo en Dios.

One: Even as night continues to lengthen, we sense the coming of light that will brighten our days, so we listen for the Word in the words of the prophet. A reading from Isaiah 61: 1-4. Aun mientras las noches son mas largas, sabemos que la luz nos alcanza, escuchamos la Palabra en las palabras del profeta. Una lectura de Isaia 61: 1-4.

The Spirit of the Lord God is upon me, because the Lord has anointed me to bring good news to the sufferingô and afflicted. He has sent me to comfort the brokenhearted, to announce liberty to captives, and to open the eyes of the blind. He has sent me to tell those who mourn that the time of God’s favor to them has come, and the day of his wrath to their enemies. To all who mourn in Israel he will give: beauty for ashes; joy instead of mourning; praise instead of heaviness. For God has planted them like strong and graceful oaks for his own glory. And they shall rebuild the ancient ruins, repairing cities long ago destroyed, reviving them though they have lain there many generations.  El Espíritu del Señor omnipotente está sobre mí, por cuanto me ha ungido para anunciar buenas nuevas a los pobres. Me ha enviado a sanar los corazones heridos, a proclamar liberación a los cautivos y libertad a los prisioneros,  a pregonar el año del favor del y el día de la venganza de nuestro Dios, a consolar a todos los que están de duelo, y a confortar a los dolientes de Sión. Me ha enviado a darles una corona en vez de cenizas, aceite de alegría en vez de luto, traje de fiesta en vez de espíritu de desaliento. Serán llamados robles de justicia, plantío del Señor, para mostrar su gloria. Reconstruirán las ruinas antiguas, y restaurarán los escombros de antaño; repararán las ciudades en ruinas, y los escombros de muchas generaciones.pl

One: This is the Word of the Living God. Esta es la Palabra de Dios Viviente.

All: We rejoice in the Anointed One who came and who comes. With joy-filled hearts, we join the energy of our life to the life whose birth we anticipate. With Christ, we, too, will bring good news to the oppressed, bind up the broken-hearted, proclaim liberty to the captives and release to the prisoners, and proclaim the year of the Lord’s favor. Nos regozigamos en la uncion de Dios, que llego…que llega. Con corazones llenos de gozo, unimos nuestra energia a la de aquel a el qual anticipamos. Que Cristo, nosotros traemos las buenas nuevas…proclamamos el favor de Dios.

One: For us, God has replaced our mourning with the oil of gladness, so we light this third candle and name it Joy. Let us pray. Dios, cambio nuestro lamento, combiertelo en gozo real a mediadas que alumbremos esta vela y la nombremos gozo. Oremos. 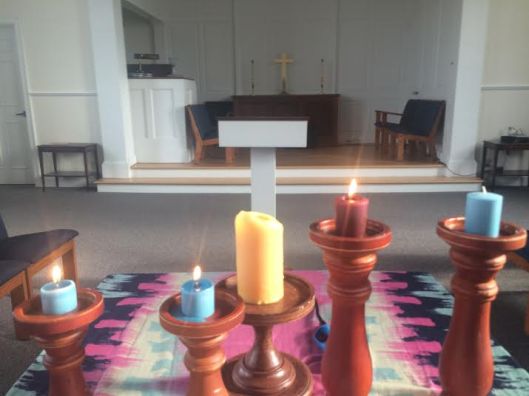 Who here remembers the story of Winnie the Pooh? Winnie the Pooh is a happy little bear that seems to always be headed towards a happy joyous adventure. He is rarely alone. Is usually in the middle of a group of friends. Among these friends are: Christopher Robin, who is really the protector, “caretaker,” merrymaker, and owner of the collection of stuffed animals…Piglet, Tigger, Rabbit, Owl, Kanga, Roo, Gopher, Lumpy the Elephant, Kessie the Blue Bird, Bruno the Monkey, they are a merry band of friends whose adventures are a thing of legend! They have parties and gatherings and seem to find any excuse to get together and just have FUN!

But then there is Eeyore the Donkey. Eeyore is BLUE. In every sense of the word blue. He is blue/grey in color. He is blue/sad in mood. He seems in dire need of a pick me up hug. That is what I always want to do to Eeyore, hug him and tell him I love him. He just seems to need it more than any other character in children’s stories. Eeyore can’t seem to catch a break of good fortune…see, even when things go well, he can only see the negative:

“It’s snowing still,” said Eeyore gloomily.
“So it is.”
“And freezing.”
“Is it?”
“Yes,” said Eeyore. “However,” he said, brightening up a little, “we haven’t had an earthquake lately.”
The House at Pooh Corner by A. A. Milne

Can you imaging what a “Debbie Downer” Eeyore would be during the holidays? You have a desire to be festive, to have fun, to join in merry making with friends and along comes Eeyore. Blue/grey Eeyore. Blue/sad Eeyore. And, I have to ask, who wants him around?

Who wants negative, sad, Eeyore around as we try to make a joyful noise:

Eeyore is like many of us…just barely holding on to the energy we need to make it through this day. For Eeyore and for many of us, this Joyous season finds us joyless in the worse of ways. It finds us feeling vulnerable and lonely.

For some of us, this is the first (or simply just another) day in a long line of days spent missing a loved one who has passed away. Struggling with illness and ailments and aches and pains. Just another day of trying to make ends meet and knowing that the bread might not make it all the way to tonight. And our struggles definitely are NOT OUT OF SIGHT.

Rather than ignoring the feelings, the emotions, the struggles of the Eeyore’s in our lives, rather than pretending to be worry free, rather than expecting others to “put on a happy face…”

The joy of this season… The joy of all our seasons is in the knowing and feeling and being Loved by God! We are called to be caregivers, peacemakers, hope-fillers…we are called to be Winnie the Pooh and Christopher Robbins and love each other in the midst of the real circumstances, not the imaginary make-believe retelling and recasting…

This week, a friend sent me a picture of a sad Eeyore trying to hide inside himself, and the caption read, “one awesome thing about Eeyore is that even though he is basically [more than likely] clinically depressed, he still gets invited to participate in adventures and shenanigans with all of his friends. And they never expect him to pretend to feel happy; they just love him anyway, and they never leave him behind or ask him to change.”

That is what true joy, the JOY of this season looks like. An invitation to be your authentic true self, feeling, dealing and struggling…and loving and being loved by God and by each other. 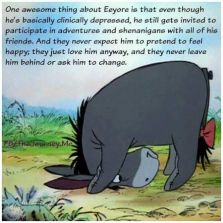 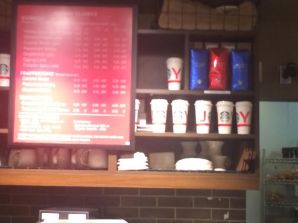 PASTORAL PRAYER (http://www.worldinprayer.org/):
And, now let us join the world community in prayer
God of the Whole World, we wait with Mary during this season of Hanukkah and thank You for our lives’ many miracles and blessings. We light one candle each day in recognition of the illumination and hope You bring into our homes and neighborhoods.

In this halfway point of Advent, we pray for those who are like Mary: pregnant, pure in spirit, unwed, travelers, without shelter.

We do not have to look far into this world to see travelers without shelter: those 11 million people who have fled Syria, many of whom have recently been welcomed into Canada..

We pause with Mary to reflect on all growing inside of us:
faith, worry, doubt.

We see terror all around us: in Amsterdam, in Australia, in Rwanda

We pause with Mary to reflect on the world around us: far journeys, strangers, judgment.

We hope that that the Vatican’s recently released document urging Catholics not to seek to convert Jews will carry into tolerance for other religions, particularly followers of Islam.

We wait with Mary for all persons to be citizens in their communities; Chinese officials have announced they will grant official status to its “unregistered” citizens, many of whom were children born illegally under the one-child policy.

Our Father who art in heaven,
hallowed be thy name.
Thy kingdom come.
Thy will be done
on earth as it is in heaven.
Give us this day our daily bread,
and forgive us our trespasses,
as we forgive those who trespass against us,
and lead us not into temptation,
but deliver us from evil.
For thine is the kingdom,
and the power, and the glory,
for ever and ever.
Amen.

Responsive Benediction:
One: God, you call us to patience and diligence Dios, nos llamas a paciensia y diligencia
All: And we want quick and now. Y nosotros queremos rapido y ahora.

One: God, you call us to remember Dios, nos llamas a recordar
All: And we cry JOY instead of truth. Y enves gritamos Gozo en vez de verdad.

One: God, you call us to prepare the way for your reign. Dios, nos llamas a preparer el camino a Tu reino
All: And we think, I feel… I think… I am… Y pensamos, yo siento…yo creo… yo soy…

One: God, forgive us our selfishness and lead us in the ways of patience, and community, and love. Dios, perdonanos nuestro egoism y dirigenos a tu paciensia, y communidad, y amor.
All: Amen.